I was riding the 916 back from Whanganui to Auckland the day after Boxing day with Justin on his Ducati Paso. It had been a weekend with lots of riding with the Tailpipes Crew for the Whanganui Boxing day street races. Unfortunately, this was also the weekend that Max had his accident. Naturally our focus was on making sure he was OK and we returned back to Auckland somewhat tired, but glad Max was in good hands and on the mend.

So, here I was, Justin in front on his Paso, setting the pace at a comfortable 100 kph. It was actually really nice cruising at this speed. It was a time to reflect on the weekend’s events but by the time we got to Ngaruawahia, my wrists were suffering. I have a Yamaha Virago XV750 cafe racer project in my shed, which wasn’t moving along very fast as I don’t have much time with my work commitments.

I remember seeing a Monster Cafe racer online a few years back by a guy that calls himself ‘Desmovergine’. I was impressed with the raw look of his machine and it struck a chord with me as a ride I could see myself owning. His blog makes interesting reading. I have always been envious of the gorgeous sound of 2-valve Ducatis; the low rumbling drone is a sound to behold and truly Ducati. So much so that I decided that I wanted my cafe racer to be a Ducati. Here my quest started.

In my opinion, Ducati do a lot of things right and the Monster after all, has been a Ducati success story as the longest selling model to date. The great thing about the Monster is the fact that Ducati anticipated that their owners would want to personalise their bikes. I didn’t like the high-mounted carbon mufflers and the duck beak rear fender or the huge hugger; I knew these had to go. I didn’t take pics of my bike in this state, but looking at the pic here of a similar model, you can see what I mean.

That rear wheel is screaming out to be noticed, in my opinion.

So my planned surgery started with the obligatory tail chop in order to shorten the look of the bike, then the removal of the mufflers in preparation for something more custom and different from the standard low mufflers that grace many a Monster, which I think are still WAAAY too big.

Justin had a pair of un-used Tomaselli clip-ons, which I tried on in order to give the front end a lower, more staunch look. Yay, they fit and to top it off, Justin has given them to me for my 50th…..a HUGE THANKS mate.

In the beginning I was planning to utilize the existing carbon Arrow mufflers by modding them in a low mounted fashion, until I found these muffler tips, which inspired me for my custom Tailpipes look. I like to look of a MotoGP style and I am going for a straight through design with a removable baffle, which will be packed with stainless steel wool and fibreglass packing. At this stage I plan to utilize the stock footrest bracket and hanger, which will be powdercoated black. With a black powdercoated swingarm, the highly polished muffler will provide a nice contrast. Why the pillion footrest you ask? I kept them in order to give my wife, Darlene a Ducati experience at last. She has never been able to pillion on my 916 Monoposto so this is my good biker husband deed. 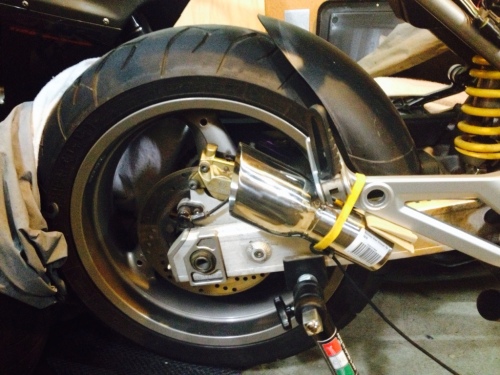 Next on the list was the rear hugger, which was in need of some weight loss surgery. Using my trusty Multi-tool, this made light work of the process.

The tail chop was approached with some caution as you only get one chance to get the cuts right. This involves removing the plastic rear fender (Ugggh) , cutting the rear tubular section of the frame and plugging up the tubes. 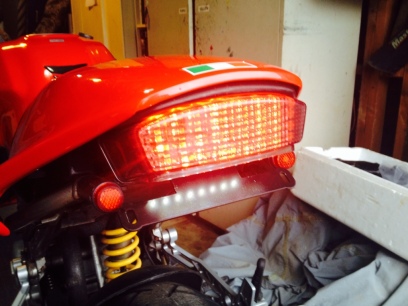 I replaced the stock tail light with an LED one from ducatimonstertailchop.com in the USA, which incorporates the indicators, as well as the license plate illumination. A new tail tidy from the same supplier finishes off the tail chop nicely. I also ordered some random reflective licence plate fasteners to take care of the LTSA regulations for reflectors, but when they turned up, they were way too big for my number plate, but perfect as tubular end plugs for my tail chop. LTSA regulations are now dealt with and I think they look quite snazzy.

In order to give the front a more aggressive look, I decided to look at a way to mount the instrument cluster lower down on the top triple clamp; I wanted to top of the cluster to be in line with the Tomaselli clip-ons for that classic cafe racer look.

I was facing a challenge however, in that by lowering the cluster, I also needed to lower the headlight for clearance. This was not such a bad thing as again, this would enhance the cafe look I was after. So after a fair bit of fiddling and figuring, I managed to get it to work with literally millimeters to spare. I had to cut up the existing headlight bracket arrangement in order to lower the headlight. Now it is off to the welders for re-welding.

Now that the Tomasellis are in place, what to do with the left over handlebar mounts on the Top triple clamp? I know….., with a small section of old handlebar, this will make a perfect GoPro mount for those Tailpipes videos whilst at the same time being out of sight of the speedo so I cannot get told of by my wife for going to slow (mmmmm)

Now that I have lowered the bars, the old brake lines will not fit. I discovered The Greenlane Speed shop who are the agents for Hel braided brake lines. They are awesome and look the part.

I am a bit undecided about the front fender. I think the stock fender is too long, so cutting this down is definitely an option. Do I stay with plastic and re-paint it to the new colour spec? (More on this later) or do I go for carbon fibre and cut that down in length. Decisions, decisions. I think I will go with the latter.

It is time to view my tacked-up Andreani custom exhaust mufflers. Hopefully the removable baffles (for changing muffler packing of course) will do their job without drawing too much attention from the law.